BOO! Scared you, right? No? Well, I’m still honing my skills as a horror enthusiast. In fact, up until a week ago, I had never watched a single horror movie. Which of course makes me the most qualified person to review three of them. With no prior experience in the realm of horror, I turned to the Trojan Torch’s expert on all things frightful, Amelia Kimberling. She recommended three spooktacular movies: IT, a bigtime horror movie, Texas Chainsaw Massacre, a classic slasher, and the Witch, for a dose of psychological horror. Not only will I be reviewing these movies, but I will also be rating them on their scariness.  Without further ado…BOO! Did I get you that time? No? Fine. Let us face our fears, get in some final girl cardio, and whatever you don’t go into the ominous woods.

I will be using the “Torch Scareometer” as I have dubbed it to judge the scariness of each film. Films will be judged based on gore, scares, villains, and the amount of physiological damage incurred.

Plot: In Derry Maine, in 1986 a group of young outcasts known as The Losers Club must overcome the trials and tribulations of everyday life and face off against an evil entity that takes the form of Pennywise the Dancing Clown  before he consumes all the children in Derry.

For three years and many sleepless nights, I allowed Pennywise to hold my mind captive in a cage of fear as I imagined him creeping out from under my bed to inform me that “we all float down here.” After watching the movie I realized that my fears were very exaggerated. Don’t get me wrong IT is a scary movie with a terrifying villain, but I haven’t lost any more sleep. What makes IT such a good movie is the characters. The members of the Losers Club, Bill Denbrough, Eddie Kaspbrak, Ben Hanscom, Riche Tozier, Stan Uris, and Beverly Marsh all have really good chemistry. As fellow outcast-hence the name “Losers Club”- they come together to defeat Pennywise by helping each other face their fears. I love the idea presented in this movie that you don’t need to face your fears alone. Pennywise played by Bill Skarsgård, is perfectly petrifying and can make the hair on anyone’s arms raise. There is a surprising amount of comedy mixed in which lessens the overall scariness of the movie but is a welcome and integral addition. In conclusion, IT is a must-watch horror movie for anyone new to the genre. With a terrifying villain, well-rounded characters, and comedy to make it spicy. IT should definitely be at the top of your horror movie bucket list.

Sally Hardesty, her paraplegic brother Franklin, and friends head out to rural Texas to check on their Grandpa Hardesty’s grave after reports of vandalism. Naturally, they decide to go visit the old Hardesty homestead before heading home. They end up running out of gas and while waiting for help and looking for gas they happen upon a homestead where a certain chainsaw killer lurks. Shenanigans ensue and Sally must set the precedent for all final girls if she hopes to escape the sadistic murder happy Sawyer family.

The Texas Chainsaw Massacre gave rise to the slasher subgenre of horror throughout the 70’s and 80”s. A slasher is considered by the horror community as a film where a killer uses an unconventional weapon to murder a group of young people. Leatherface the aforementioned killer certainly has a distinctive weapon in the form of a chainsaw. Watching the imposing giant that is Leatherface swing around a chainsaw and hack off limbs was very impressive. The gore was actually very mild most likely due to the movie being released in 1974 before the main goal was to throw as much blood at the camera as possible. Another refreshing aspect of the movie is the absence of the usual sex/nudity and bad language often present in modern slashers. The Texas Chainsaw massacre made me feel some genuine fear, but not the same fear I felt while watching IT. The terror I felt was derived from the realistic possibility of this movie. With Pennywise I could just tell myself that evil alien entities aren’t real, but the idea of a chainsaw-wielding murder is feasible in the real world. The freaky realization that there are actual insane killers in this world adds to the unnerving feeling that stuck with me throughout the movie. I have to mention the set design because I’m a bit of a film nerd, and the attention to detail is what put this movie over the top in terms of fear. Without the bones littering the floor of the Sawyer house, the iconic sliding door, or the suffocating feel of the infamous dinner scene Texas Chainsaw Massacre would not be the cult classic it is today. Honestly, though I think what amazed me most about this movie was our final girl’s indestructibleness. Sally Hardesty crashes through two windows, runs for twenty minutes straight, is tortured, and slashed with a knife several times, yet still manages to escape. Since my running capabilities are practically nonexistent  I don’t think I’ll be traveling to Texas anytime soon. 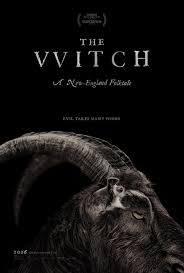 The Witch follows a family of Puritans who are cast out from society because they are apparently too religious. Their new home is adjacent to a large forest infested with witches who come after the family. Accusations fly and familial ties are broken as the devil himself slithers onto their tiny farm.

It’s official I will never sleep again, and I had just gotten over Pennywise. The second I close my eyes the haunting soundtrack filled with eerie noise and blood curdling screams comes to haunt my dreams. The early 16th-century setting sets this horror movie apart from the rest. The Old English dialect present in the time period adds an element of confusion on the part of the watcher. One scene that is heavily influenced by religious diction is when Caleb delivers a long religious speech whilst being possessed. That moment alone was enough to make my blood curdle just because of its absurdity. The Witch herself is a bloodthirsty demon who provides the movie with very gory moments. The Witch acted more as a catalyst in the film causing the family to fall apart. She is Satan’s ultimate tool of destruction. The family dynamic feels very much like a mini Salem Witch trial. The main character Tomison is accused by her mother and father multiple times as her siblings begin to disappear. This is aggravating because we know that the real culprit is the witch, but there is nothing we can do about it. In their pursuit of purity, these fools ultimately destroy their own family. As far as characters are concerned, Tomison and Caleb are the best sibling duo, the twins Jonahs and Mercy are super annoying, the mother Kathrine is crazy, and the father William has a strange obsession with chopping wood. All of these so-called puritan characters descend into varying degrees of impurity throughout the movie which only adds to the insanity. The Witch is a psychological work of art with multiple interpretations to be gleaned. Strong characters, villains, sound, and good use of setting come together to create this masterpiece. Though it is a truly terrifying thing to behold it is definitely worth the watch and a must-see for anyone new to the horror genre.

Now go forth into the realm of horror and find films that interest you. Grab some snacks (Check out the Torch’s list of fall snacks: Where To Get Fall Treats by: Natalie Eaton). Phone a friend to watch with-socially distanced of course- or a loving family member, better yet a fluffy companion who won’t find your screams of terror amusing. Don’t forget the blanket fort to ward off evil spirits and remember If you see a dancing clown, run. Don’t trespass because they might own a chainsaw, and don’t let the everlasting hellfire consume you. Happy Spooky Season!