In today’s climate, it’s difficult to meet new friends. Luckily for juniors, Matthew Cimmerer and Janna Jay, they met the perfect fluffy friend. Harvey, a young black cat, has been living with Cimmerer for about four weeks. He’s thought to be a simple short haired black cat, but he’s got the personality of a tiny human. 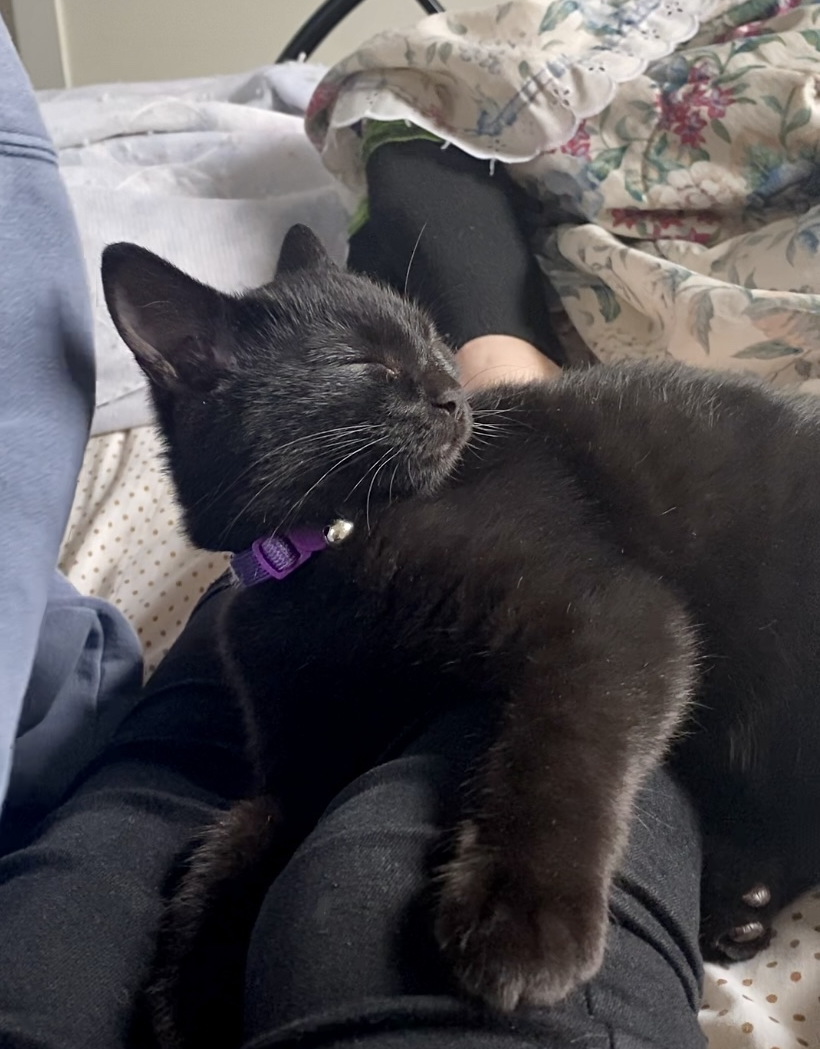 When the two of them adopted Harvey from two other Jenks students, he had ear mites, an eye infection, and was underweight. This was to no fault of the other Jenks student, as they found him on the side of the road just days earlier. During the first few nights, Harvey would keep Cimmerer up until three or four a.m. as he adjusted to his new home. He would somehow manage to turn off Cimmerer’s T.V. while he was watching. Now that Harvey has acclimated, he enjoys sleep and television much more. Harvey’s owners describe him as a very playful cat, but also laid back.

“He’ll pretty much just chill with you. He’ll watch T.V., lay on your leg and fall asleep. Usually when I’m sitting and doing homework, he’ll just lay on me and relax,” says Cimmerer.

“He’s also really really loving. Like whenever you walk into Matt’s room–if you’re me, Matt, or Emma–and you don’t give him attention immediately, he’ll cry at you until you bend down so he can give you face rubs,” says Jay.

Face rubs are Harvey’s way of showing affection. He basically softly punches you in the face with his head to show you that he likes you. When Harvey is not ignoring your existence, as cats do, he will go to extremes to give affection. He will cry out,  meow repeatedly, attack you, or even climb you. Jay and Cimmerer have discussed Harvey’s future plans during college as well.

“I’m taking him with me,” says Jay with determination. Most of all, Harvey has been a great companion and friend to have around. Harvey enjoys going on car rides and road trips. Cimmerer has been putting in applications for jobs everywhere so that he can support Harvey and himself. Through the care of Cimmerer and Jay, Harvey’s eye infection has completely healed, he is at a healthy weight, and is showing no signs of ear mites. Overall, Cimmerer’s goal is to get Harvey in for a vet visit to ensure that he is the healthiest cat he can be. So far, their journey has been more than successful. After the recent death of Cimmerer’s last pet, a bird named Chipper, Harvey’s meows have replaced the chirps. His companionship has helped them both. During these times of uncertainty and social isolation, pets will always be there to turn to.