2022 is here, and it’s already buzzing with new innovations, events, and trends. Whether it’s the clothes and gossip, or movie releases and world news, a lot will change this year. Take a look at some of the most probable predictions for 2022. 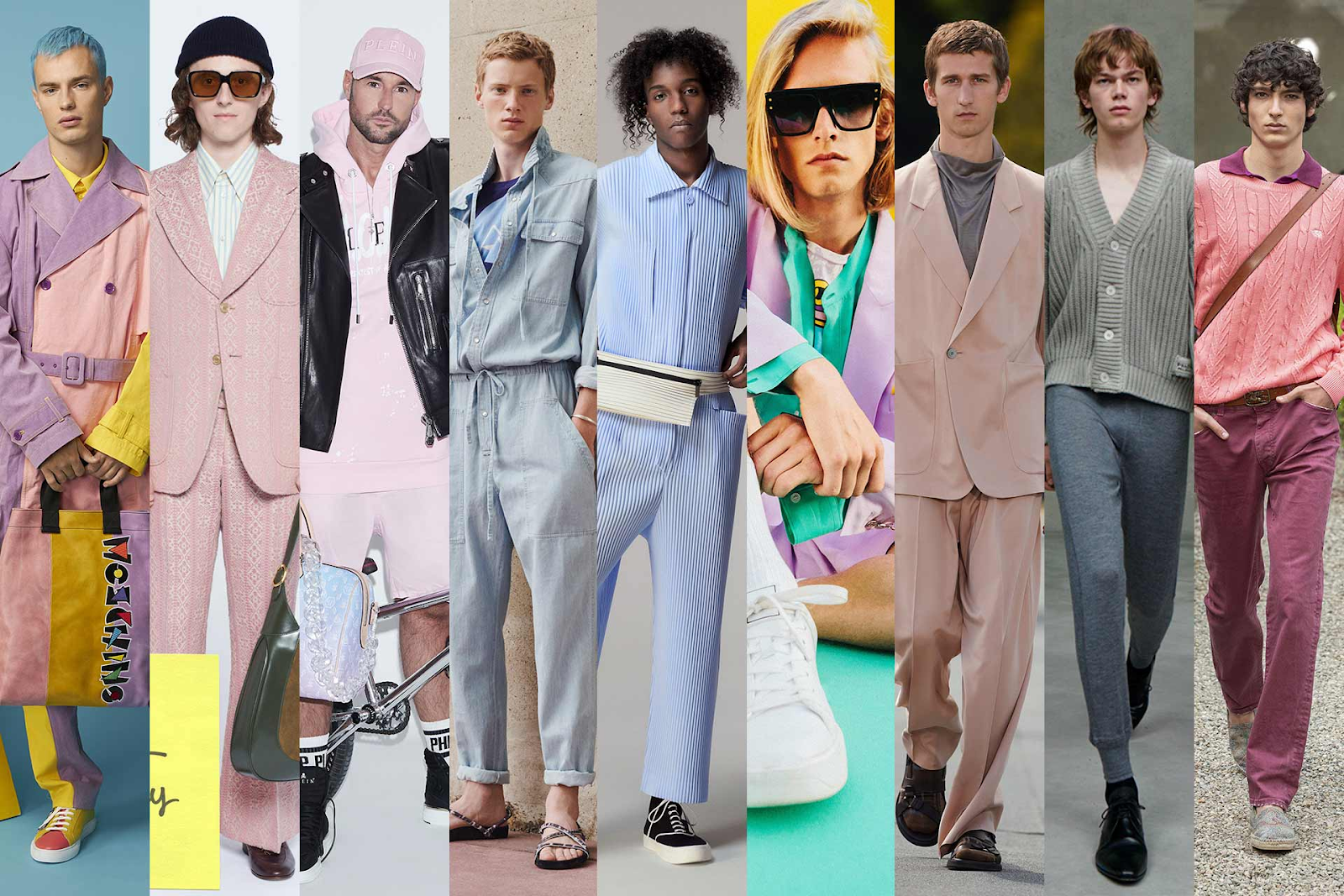 In the last five years we’ve seen some similar styles. From throwbacks to the late 90’s and early 2000’s, dubbed ‘Y2K’, to full out vintage fits. This year, we’re seeing a rise in 60’s and 70’s micro-trends with modern undertones.

Some modern twists on these styles include the purely solid, non-pattern, and often muted earthy tones. Our comically oversized pants have left that chat in exchange for a more tailored appearance. Because of the drastic rise of normalized leisure wear during quarantine and after, the pendulum is swinging the opposite way as people miss the option of getting dressed up and going out. Due to this, we’re seeing a lot less casualness with more intentional color coordinations.

Also, we’re embracing the androgynous fitted clothes to promote inclusivity. Yet, the casual nature of the vintage t-shirt will likely be seen less and less as the year progresses.

In the past few decades, and exponentially after quarantine, people all around the world have been paying increased attention to the entertainment industry. Franchises have been under constant pressure to continue growth and cater towards the hopes of their audience. Often fan scrutiny has become more feared than that of critics, we are no longer being told ‘what to like’ as social media has turned any potential audience member into a critic themselves.

Because of this, we, as the audience, are holding new features to higher expectations in this era of entertainment growth. In 2022, there are countless films on our radar- but which of these movies will live up to our high expectations?

In our isolation, we’ve seen a drastic rise in the popularity of comic-based movies, in the Marvel Cinematic Universe and DC Extended Universe and more. These films have offered a fantastical escape from the monotonous element of certain world events. This puts pressure on these franchises to affirm many expectations and theories surrounding upcoming features.

Some of the most anticipated movies this year are included in Phase Four of the MCU. Multiverse of Madness, Thor: Love and Thunder, Mobius, and Spider-Man: Across the Spider-Verse are set for release in 2022. Majority of the buzz on social media such as Twitter surrounds the movies in this same order.

Despite Doctor Strange (2016) earning less than expected at the box office, it stood to be one of the highest grossing films of 2016, especially considering it focused on introducing a new character from comics into the cinematic universe. Between this and the incredible response to WandaVision (2021) – both from audience reviews, critics, and the expansive list of awards won by the series- we can expect that Multiverse of Madness (2022) will be more than successful with audiences this year.

Thor: Love and Thunder (2022) has been long-awaited by audiences after it’s announcement in 2019. Not only is Christian Bale appearing, famous for shape-shifting for any role and former DC actor, but many other actors priorly established in the franchise. From Avenger’s like Mark Ruffalo to the cast of Guardians of the Galaxy (2014), it’s a safe bet that the film will live up to many expectations.

However, it becomes more difficult to predict the fate of features such as Morbius and Spider-Man: Across the Spider-Verse. As the franchise explores darker characters like Venom, audience reactions are scattered. What we know so far is that Jared Leto will be seen ushering audiences further into the thriller genre of Marvel Comics, sharing the screen with Michael Keaton, seen in Spider-Man: Homecoming (2017), and Matt Smith, a British actor known for his roles in Doctor Who and The Crown.

As for Spider-Man: Across the Spider-Verse, all signs point to a successful feature, with Spider-Man: No Way Home (2021) having an amazing turnout on all fronts, and the praise over Spider-Man: Into the Spider-Verse (2018). The two questionable factors in the turnout of this film are the expectations that fans have after the ambitious, riveting nature of Spider-Man: No Way Home. Second is the fatal problem with current animated movies- despite the great reviews and the raving of fans- animated films make drastically less than live-action films.

On the other side of this coin, we have the DC Extended Universe. The biggest film we’re awaiting now is The Batman (2022). The last Batman-centered film was released a full decade ago, and marked the end of Christopher Nolan’s trilogy. Christian Bale’s interpretation of the character is now widely accepted by audiences, and the film held impressive box-office sales. However, with the last trilogy holding a definitive mark of modern completion- new reboots have a lot to live up to. Fans embraced Nolan’s dark exposition of the classic comic, so will Robert Pattinson’s rendering of the Dark Knight persona be accepted? As an actor best known for his performance in The Twilight Saga (2008-2012), the verdict is out on how audiences will react to his second, and very different, bat-based character. This being said, between Matt Reeves directing and Pattinson’s acting, fans are understandably curious in awaiting this feature, and the box-office is sure to reflect that.

Uncharted is another feature coming up soon, set to release February 18th. The movie is loaded with a recognizable cast, starring Tom Holland, Mark Wahlberg, and Antonio Banderas, based on the video game of the same name. Between the fans of the game, which was first released in 2007, and fans of the actors, especially considering Tom Holland’s recent accolades, it’s safe to say that the movie will at least be a minor hit in theaters. Yet, the longevity of this movie’s fame is dependent on fan opinion in relation to the game, as many fans have already stated their fears that the film will stray too far from the original narrative.

In recent years, we’ve had more sequels released than we can count. From classic films to movies released in the 2000’s, they are all getting a second wave. This year is no different, with Jurassic World: Dominion, Avatar 2, Fantastic Beasts: The Secrets of Dumbledore, and The Flash also set to release in 2022.

If you sit down and turn on the news at any given time, it won’t be long until you hear about the high unemployment rates that our country is currently experiencing.

This is higher than rates during what we know as the ‘2008 recession’, which in reality reached a 10.0% unemployment rate in 2009. Along with the 1982 recession, which reached its highest at 10.8% unemployment.

Basically, what we’re experiencing now are the highest unemployment rates we have seen since The Great Depression when they exceeded 25%.

So, what does this mean? Initially, unemployment was an outcome of the pandemic. As the lack of sales affected our businesses, they had to let go of countless workers. You are probably wondering why this has not increased since our work force has been able to get back to normal. As nice as it would be, the reasoning behind this cannot be pinned down to one cause and effect.

The distance work that our labor force has experienced in the past few years has re-written the rules of employment, which is something that several companies are adapting to accommodate. However, the majority of layoffs in 2020 affected the lower-paying jobs, and after every recorded recession, there has been wage growth to supplement loss as the economy recovers.

Wage growth means that the people that were either able to keep their jobs or get employed during an economic recovery experienced an upturn in pay. This can be harmful because when  many lower-paid workers are laid off, the wage growth is affecting the higher-paid workers. Basically, after 2020, we saw unprecedented increases in wage growth because companies were building upon the wages of higher-income workers. This means that lower-paid positions are falling out of the job market, and rates for these positions are dropped to prevent further unemployment, which is also harmful for the economy.