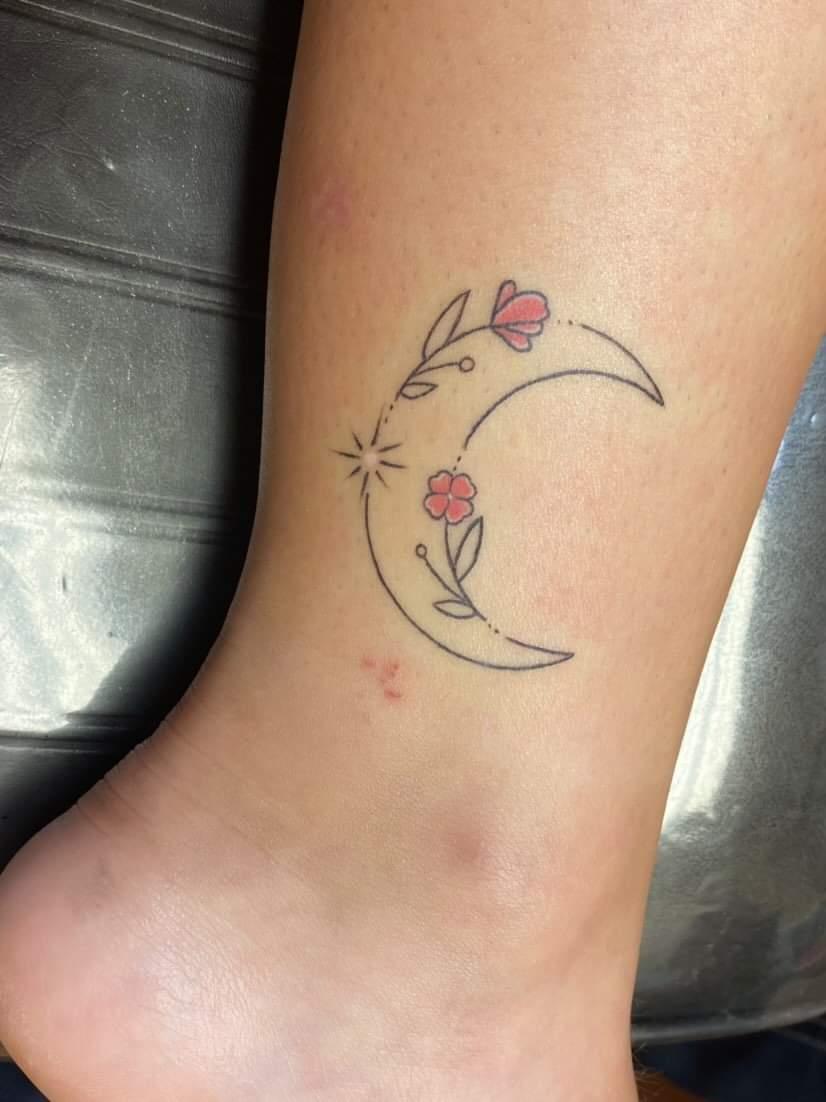 The age-old tradition of tattoo art has been dated as far back as 3000 B.C but was only popularized three or so centuries A.D among Japanese men.  It was not until the late 1900s that tattoos became common among all people.  Since then, they have been growing in both popularity and what they have to offer.  Today, tattoos are widely available and used for a wide variety of practical or sentimental implications, such as to forever commemorate important events, to remember people, to provide medical information in case of emergency, or just for fun.  And students at Jenks are no exception.

Jenks Senior Chloe Lepak has multiple tattoos: one of a small crescent moon, adorned by roses, and another that is a large reminder to be compassionate to others.

“This first tattoo is about 7 months old,” Lepak says. “It has special meaning; I got it for my grandfather who has passed away.  He told me that he would always watch over me by sitting on the moon, so I got it to remember.”

According to Visually Community Infographics, tattoos are most commonly on places such as the forearms, neck, chest and back.  For Lepak, she had intentionally chosen her ankle.

“I wanted a spot that wasn’t super visible like my arm, but also a spot that could be visible if I chose to let people see,” Lepak says.

Alongside this, Lepak also has the word Love transcribed onto her side in a cursive font.

“This one is just a reminder to always love people, no matter how hard it gets,” Lepak says.  “This one also hurt pretty bad, but I passed out before it ended.”

And the theme of roses as a symbol of strength continues, as Jenks Senior Maddy Bushrod shares the story behind the rose-bedecked butterfly on her forearm.

“It was dedicated to my friends who I have lost or almost lost to suicide, as well as myself.  I struggled with severe depression after moving to the UK during the pandemic,” says Bushrod, after moving back to Jenks.  “I spent lots of time finding the will to continue.  It reminds me that I have gotten through everything so far and that I have the strength to keep going.”

“My tattoo artist said the tattoo looked great by itself, and including the word wouldn’t be a great idea.  In the future, I would like to get the word tattooed somewhere close.”

Similar to Bushrod, Senior Carter Ford has multiple tattoos dedicated to his family.

“I have three fishing lures on my left arm: one for my father, one for my uncle, and one for my grandfather,” Ford says.  “They have all passed so I knew I needed to get something to represent them.”

“Fly fishing is something we all did together, and they all taught me how to fish,” Ford shares, when asked about his choice of tattoo.  “They didn’t only teach me how to fish, but also how to be a man.  I got them on my left arm because I use it to reel, so they’re always there to help me catch the next big fish.”

While tattoos are often sentimental to the loss and remembrance of others, they can also be symbolic and give insight into the lifestyles people lead.  Jenks student and published author Erynn Irvine shares the motive behind the tattoo she received last spring break:

“It’s on my right-wing; It’s a Sun.  A circle with detached lines,” Irvine explains.  It represents my personality as well.”

“I don’t think I’ll regret it,” Irvine adds.  “I’ve wanted this tattoo in this spot since my Freshman year.  The reason behind it is that I love summer and tanning in the sun.  I love warm, sunny days because they just make me happy.  I got this tattoo because it represents my personality as well.   I think I will get more.”

At the end of the day,  a tattoo is a sentiment to wear with pride.  It is a stylistic choice just like the shirt and shoes you choose, but also a way to commemorate and display traits of your personality, what you have been through, or where you came from.  And remember that a tattoo is permanent, so tattoo responsibly!

One thought on “A Story Etched in Ink: Students with Tattoos at Jenks”